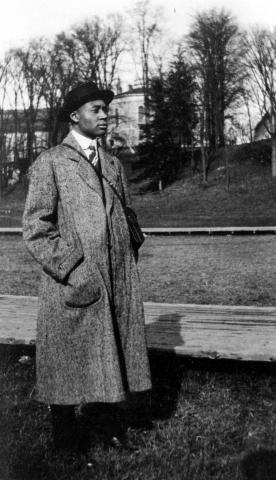 Back in the United States, he entered Harvard Law School and was elected as an editor of the Harvard Law Review, the first African American to hold the position.  He received both his LL.B. (1922) and D.J.S. (1923) from Harvard and returned to Washington D.C. to practice law with his father.

Five years later, in 1929, he was recruited to serve as an associate professor and vice-dean of the Howard University School of Law.  He is credited with transforming the school into a nationally recognized academic institution.  During his life, he personally mentored a generation of African American lawyers, most notably William H. Hastie’25 and Thurgood Marshall.  Houston is best known for his work as legal counsel for the NAACP.  He is considered a chief architect of the legal strategy that challenged the principle of “separate but equal,” and argued several famous civil rights cases, including:

Although Houston died in 1950, he is credited as being instrumental in laying the groundwork for the landmark Brown v. Board of Education decision in 1954.