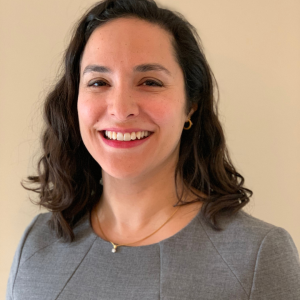 Julie Babayan ’03 is the head of policy development with Adobe’s Policy, Government, and Ethical Innovation team in Washington, D.C. In her role at Adobe, she focuses on a range of global technology policy topics, including artificial intelligence, intellectual property and education issues. As part of Adobe’s internal AI Ethics Committee, Julie worked on a diverse, cross-functional team that helped develop and implement Adobe’s AI ethics principles and processes.

Before joining Adobe, Julie worked on technology policy issues on Capitol Hill, serving as counsel in the U.S. House of Representatives Committee on Energy & Commerce and the Office of U.S. Senator Elizabeth Warren. Prior to working on Capitol Hill, Julie practiced telecommunications law in Washington, D.C. Julie is a native of Boston, Massachusetts. She received her Bachelor of Arts in Political Science and French from Amherst College and her Master of Science and Juris Doctor degree from Boston University.

Q. What was your first job after Amherst? A. I worked for the Democratic National Convention Committee in Boston, and then for John Kerry’s presidential campaign. 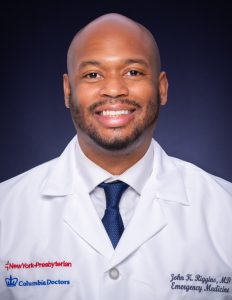 John attended secondary school at The Taft School in Waterbury, Connecticut, and graduated with a Bachelor of Arts in Black Studies from Amherst College. After Amherst, he mentored and tutored high school students as an AmeriCorps member with the City Year New York program. John completed his emergency medicine residency training at SUNY Downstate and Kings County Hospitals in Brooklyn. He received his medical degree from the Albert Einstein College of Medicine.

Q. How do you use your liberal arts education in the work you do today?A. I use the critical thinking skills that I developed through my liberal arts education on a daily basis. In the emergency department, sometimes, I am forced to make critical decisions in a short time window with limited information. My classes at Amherst College taught me how to think critically and assess situations efficiently and thoroughly.

I also work as a healthcare leader administrator in my department. As an administrator and member of department leadership, I have to come up with creative solutions to the problems that we face in the emergency department and hospital setting to make it better for the healthcare workers and our patients. My Amherst classes gave me the skillset needed to do that for a variety of challenges that I face as a physician and administrator each day. 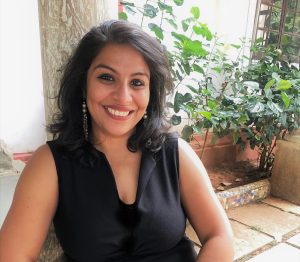 Antara Ganguli ’01 is the director of the United Nations Girls Education Initiative (UNGEI). UNGEI is the only multilateral entity dedicated to girls’ education and gender equality in and through education.

Antara has 20 years of experience in international development. She led gender equality for UNICEF India, its largest non-humanitarian office, where she advised and supported 13 field offices on gender-based violence, gender-transformative pedagogy and positive masculinity. She has a Master of Arts in International Economics from Johns Hopkins University and a Bachelor or Arts in English and Psychology from Amherst College.

Previously, Antara was the deputy representative for United Nations (UN) Women in Bangladesh. She started her career as a primary school teacher for children of sex workers. Antara is also a novelist. Her most recent work, Tanya Tania, a coming-of-age epistolary novel set in Pakistan and India, was published by Bloomsbury in 2016.

Q. Tell us about a job you did not get or take. How did this shape your career path?A. In 2015, I received a very senior job offer with full contract benefits and turned it down for a six-month contract at a lower level. I then took a “national” position, which was less prestigious and earned 60% less money with the India Country Office, so I could be with my mother after my father passed away. Everyone told me it was [a risky career move].

But the five years I spent in UNICEF India were among the best of my life. I felt a kind of contentment and satisfaction with who I am in making that decision that I think is rare. I learned more than I can express about the children and communities I want to serve, what marginalization looks like on the ground, and where the gaps are in the UN system in addressing those needs. I also met my partner in India, although he is American and I had lived for 12 years in America.

Moving from that “national” job back to an “international” posting was as difficult as everyone had warned. I applied for 31 jobs before getting this one. But this is my dream job, and I would have wanted it above every single one of those 31 jobs I had applied for. The process taught me so much about the landscape and what I wanted to do within it (e.g., focus on a sector like education) and also taught me tenacity and self-belief like never before. 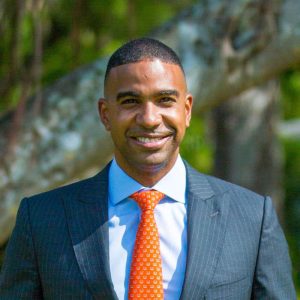 Charmel Maynard ’07 currently serves as associate vice president, chief investment officer, and university treasurer for the University of Miami. In this capacity, he leads the University’s efforts to invest over $4B in assets, including endowment and pension funds. Charmel is also responsible for the University’s ~$1.5B capital structure, including liquidity and debt issuances. Additionally, he manages treasury and cash management.

Q. What impact do you hope to have through your career?A. To leave the institution I serve better than it was when I got there and to inspire as many underrepresented youth along the way.