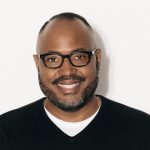 Chip Garner ’89 is Senior Vice President at MWWPR, creating and implementing integrated communications strategies for a variety of corporate and crisis clients.

Directly prior to MWWPR, he was VP, Americas, for British Airways, where he oversaw all media relations, crisis, creative, and corporate campaigns for the global airline in the Americas, Caribbean, and Bermuda. Prior to BA, he was Senior Vice President of Social at the world-renowned advertising agency Ogilvy, working extensively in influencer management, crisis and nuisance governance, executive positioning and training, and content development, as well as providing strategic direction for global clients.

His background includes a rewarding time at Rubenstein PR as the VP of Digital Strategies, as well as stops at Showtime Networks, the New York Times, and, at the beginning of his career, ABC News. He has also produced award-winning independent films and directed infomercials in Florida.

A. One of the biggest gifts of a liberal arts education, for me, was learning to be a critical thinker – to not only be a problem solver, but to identify which problems need solving, to not just analyze and synthesize information, but to listen with an open mind so as to hear the words beyond the words, and to be a curious, creative explorer that, through service, seeks the truth. Which is another way of saying that a liberal arts education was the best possible foundation for a career in communications. 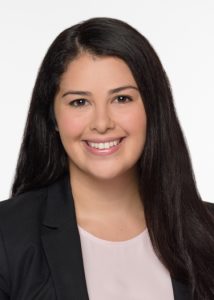 Dr. Gabriela Ulloa ’15 is a first-year resident physician in pediatrics at NYU Langone, working at both Hassenfeld Children’s Hospital and Bellevue Hospital. She was among the group of medical students who elected to graduate early from NYU School of Medicine to join internal medicine residents during the peak of the COVID-19 crisis in New York City. In addition to her extensive experience with the treatment of this new virus, Gabriela is passionate about global healthcare, immigrant healthcare, and pediatrics, with a focus on serving diverse populations.

During her time at Amherst College, Gabriela became passionate about global health, preventative medicine and philanthropy. Gabriela majored in Biology, completing a senior thesis in Cell Biology. She played a role in implementing Project Salud and served as its President, establishing an internship program sending Amherst College students to a general clinic in Manchay, Lima, Peru.

A. Something I learned early in my career is that my personality, my own history and my strengths can shape the care I give in a positive manner. It allows me to relate to my patients on a personal and professional level that makes patients and families more comfortable in a healthcare setting. 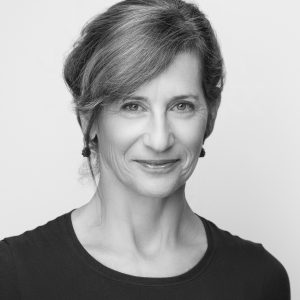 Inda Schaenen ’83 P’15, MEd, MFA, PhD, is a writer, journalist, professor, and certified English language arts teacher in St. Louis, Missouri. She’s the author of Speaking of Fourth Grade: What Listening to Kids Tells Us About School in America, four young adult novels, and The 7 O’Clock Bedtime, a parenting guide.

Raised in New York City and a St. Louis resident since 1991, Inda has taught in public, private, urban, and suburban schools, from second grade to graduate school. In 2013, Inda began serving in Normandy, the unaccredited school district that graduated Michael Brown, who was killed by a police officer on August 9, 2014. In response to the educational chaos and incoherence that preceded and followed that moment, Inda founded Project Lab St. Louis, an education nonprofit based in her middle school classroom in Normandy.

Over the last five years, Project Lab St. Louis has engaged hundreds of students from different St. Louis communities in projects in the humanities, including Normandy Crosscurrents, a program of cross-community dialogue, Living Questions, a year-long curriculum of philosophical inquiry, and From Deer to Venison, an exploration of meat-eating and culinary arts. Project Lab St. Louis was recently recognized for inclusion and equity by FOCUS St. Louis in their 2019 “What’s Right with the Region” awards, and that same year, Inda received the Courageous Educator Award from St. Louis’ Educators for Social Justice.

An avid swimmer and pickleball player, Inda is married to Michael Dee (Amherst ’80), a classroom teacher since 1981. They have three children and recently welcomed their first grandchild.

A. Caring, wondering, questioning, imagining, and drawing connections is what writing is all about. Teaching, too. I bring my whole self to the work that I do, and my whole self was (and continues to be) shaped by the liberal arts experience. 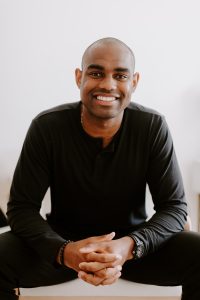 Sean Legister ’11 is currently an Alternative Product Specialist in Goldman Sachs’ Merchant Bank. He has been with the firm since receiving his bachelor’s in both Black Studies and English from Amherst College in 2011. Prior to his current role, he was an equity sales trader on MAPS, a cross-asset team, since its 2014 inception. He started his career at GS as a sales trader in equity based financial instruments, listed derivatives, swaps, and international equities as part of the Global Institutional team.

Sean serves on the Board of Trustees of the Cristo Rey New York High School, where he mentors current students and alums. He is the founder and curator of the Monday Morning Lift (MML) and Breakfast Bites. The MML is an e-mail subscription service that aims to inspire, challenge, and motivate readers of all ages. Breakfast Bites is an initiative he created at Goldman Sachs to help Black professionals gain exposure within the firm, as well as build the culture within the Black community. Both of his parents were born and raised in Jamaica.

A. I learned early in my career that my adversity only defines me if I let it. I struggled through my registration exams, and when I look back, I ask myself, “Why?” Am I dumb? Did I not work hard enough? I didn’t take tests at Amherst so learning the material, as well as how to take tests are skills that I’ve needed to improve over time. After my initial setbacks, many people judged my aptitude based on my test scores given there aren’t many tangible data points from which to determine one’s ability so early in a career. However, nine years later, I’m still at Goldman Sachs (studying more than most for tests) but continuing to build a career. I trust that the initial adversity allowed me to understand what it takes to be resilient and how to manage through personal struggles. 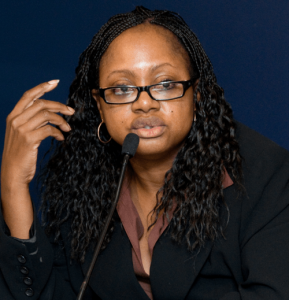 Bonnie Jenkins ’82 is the Founder and Executive Director of Women of Color Advancing Peace, Security and Conflict Transformation and a Non-resident Senior Fellow at the Brookings Institution. She is Chair of the Committee on Radioactive Sources: Applications and Alternative Technologies of the National Academies of Sciences. She is an Adjunct Professor at the Georgetown University School of Foreign Service and a Professorial Lecturer at the George Washington Elliott School of International Affairs. She is also a Visiting Scholar at the University of Pennsylvania School of Nursing, and School of Veterinary Science.

She was an Ambassador at the US Department of State where she served as Coordinator for Threat Reduction Programs in the Bureau of International Security and Nonproliferation. Bonnie was also the DOS lead to the Nuclear Security Summits and was also a leading US official in the launch and implementation of the Global Health Security Agenda. She was the 2016 DOS International Security and Nonproliferation Bureau’s nominee for the Secretary’s Award for Excellence in International Security Affairs. Bonnie was the Program Officer for U.S. Foreign and Security Policy at the Ford Foundation and Counsel at the National Commission on Terrorist Attacks Upon the United States (9/11 Commission). She was an Attorney-Advisor at the Arms Control and Disarmament Agency and is also a retired Naval Reserves Officer.

A. To do what is my passion. 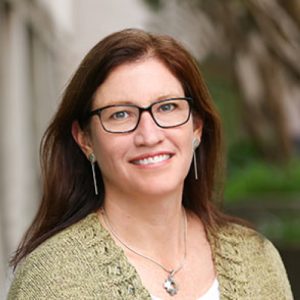 Wendy Halpern ’88 is a veterinary pathologist with more than 20 years of drug development experience. She earned her DVM from the Ohio State University, where she also completed an MSc in Veterinary Pathobiology, followed by a PhD in Biomedical Sciences from the University of New Mexico. Drawn by the appeal of biotechnology, she joined Human Genome Sciences in 2000, and subsequently transitioned to Genentech as a Scientist and Veterinary Pathologist in 2007. In addition to specific project support at Genentech, she actively contributes to the nonclinical strategy and safety assessment for pediatric drug development, with emphasis on challenges in pediatric oncology. She represents the Biotechnology Industry Organization (BIO) on an International Committee for Harmonisation (ICH) Working Group which recently completed a new globally harmonized nonclinical safety guidance document for pediatric medicines (ICH S11). She has been an active member of the American College of Veterinary Pathology, the BioSafe group of BIO, the Birth Defects Research and Prevention Society, Safety Pharmacology Society and the Society of Toxicologic Pathology.

A. I write. I read. I make choices about where to focus my energy and thoughts. I try to see things from more than one perspective. I recognize the value of others, and their strengths, to enable a team accomplishment. I know how little I really know, but also the joy in continuing to ask, explore and learn.